This was what happened early this week between two giant telecommunication companies in Nigeria as. Culled from Daily trust

Telecommunications firm, Etisalat Nigeria has brought a legal action against MTN Nigeria and Visafone Ltd, challenging MTN’s use of the 800MHZ spectrum following the acquisition of Visafone. 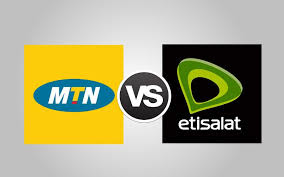 
The court action was necessary to prevent the use of the spectrum by MTN at this time, as it will entrench the dominance of MTN in the retail data services market.


It noted that MTN Nigeria had been declared dominant by the Nigerian Communications Commission (NCC) in 2013 and remains dominant in the wholesale leased line and retail voice markets.

Chineze Amanfo, Head of Media, Etisalat in a statement said:


“The use of the 800MHz spectrum to deploy broadband services ahead of its competitors, particularly those who, prior to MTNs purchase of Visafone, held similar spectrum bands as MTN, will further entrench MTN’s dominance in the Nigerian telecommunications sector.”


"We have, in addition and in line with Section 86 of the Nigerian Communications Act, 2003, engaged the NCC to understand the basis of its decision to approve the acquisition. As you are aware, the matter is already in court; as such, we are restrained from commenting further on the matter."


Before the acquisition of Visafone by MTN Nigeria last month, the GSM operators controlled about 98 per cent of the Nigerian market, while the CDMA controlled 1.58 per cent market share, according to statistics from the NCC. Amina Oyagbola, MTN Corporate Services and human Resources Executive, had said the acquisition of Visafone would help to leverage resources for service enhancement and would deepen the growth and rollout of broadband services across the country in support of the National Broadband Plan, for the benefit of Nigerians.

Telecom Battle: Etisalat Vs MTN Legal Fight John Peter 2016-02-11T12:30:00+01:00 5.0 stars based on 35 reviews This was what happened early this week between two giant telecommunication companies in Nigeria as. Culled from Daily trust Telecommunicat...