Home news reviews Must Read: Facebook Is Out For Destruction?

Facebook is making things hard and easy for us. Of all the security complaints  they could only come up with end-end encryption of secret conversations. What happened to those who like keeping records, or those who love Coded Messages?

Is Secret Conversation even the best name to this security? What other names do you think would have been better than secret conversations? Somany questions have been running through different mindsets.

Really, it's not like your messages that are being sent and received are not protected, which is why we don't have malware or unnecessary spam pop-ups while chatting. However, you will agree with me that there are times you wouldn't want your conversations to be seen by any third party (especially sensitive informations), thus the job of having 'secret messages'. In their words posted on facebook newsroom

"To enable you to do this we are starting to test the ability to create one-to-one secret conversations in Messenger that will be end-to-end encrypted and which can only be read on one device of the person you’re communicating with. That means the messages are intended just for you and the other person — not anyone else, including us. Within a secret conversation, you can also choose to set a timer to control the length of time each message you send remains visible within the conversation". 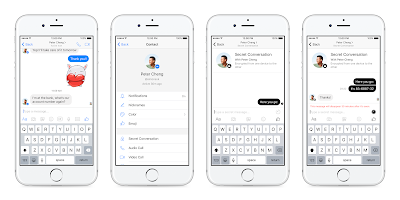 However bad this may be to some extent, Facebook Secret Conversation will go a long way to reduce Crime by way of minimising the platforms for which terrorists communicate and do their evils. Also, a very vital question is can these personal messages be retrieved from Facebook when it's needed? I'm sure the FBI or other relevant security agencies would want to know that too.

WHAT YOU NEED TO KNOW ABOUT FACEBOOK SECRET CONVERSATIONS

In using Facebook Secret Conversation (Ent-to-End Encryption) it is pertinent we take note of the following:

It doesn't pop-up automatically: It's not a feature that just rolls in on your chats automatically, you have to activate it from your settings.

One device conversation: Facebook Secret conversations can only be used on one device. That simply means the secret messages you used on your phone won't be displayed on your tablet or pc's except you start a new conversation.

Set Time-Bomb: Not actually a bomb really, you can set timers, similar to that of BBM but this deals with minutes. You can choose how long you want the secret conversation to display between you and the person on the other end before it tarnish into tin air (gets deleted).

Transactions Disabled:  All gifs, videos, payments  and any other popular messenger features have been disabled so don't go looking out for them.

This has received many reactions recently, examble is a major tech influencer who believe the opt-in mode for 'secret conversation' just spells destruction.

Are we really in destruction?

Share this with short URL Get Short URL
news
reviews

0 comments on "Must Read: Facebook Is Out For Destruction?"