OMG! WhatsApp To Stop Working On Symbian Phones By December 2016

WhatsApp is set to discontinue its service on all Symbian devices by 31st of December, 2016. This follows the recent  case where it also announced withdrawing support for Blackberry devices. You will recall that since the CEO of Facebook -Mark took over WhatsApp things has not been easy, there has been an upgrade starting with Blackberry devices and now Symbian operating System. Maybe because they want everyone to jump into using Smart Phones.

However, to confirm this, Symbian Phones using WhatsApp are now getting pop-up messages which reads thus:

"Unfortunately, you won't be able to use WhatsApp after 31/12/2016 because WhatsApp will no longer support your phone". 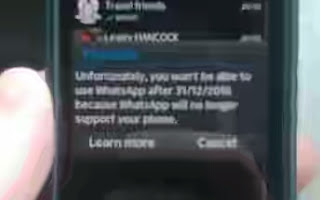 We apologies for the poor image quality.

Notwithstanding, if you are still using a Symbian device, it is set time you start looking for ways to upgrade to Smart Phone because by December 31st 2016, WhatsApp will seize to work on Symbian and BlackBerry devices.

I guess you can't do without using WhatsApp on your phone, Can you?

0 comments on "OMG! WhatsApp To Stop Working On Symbian Phones By December 2016"