It is over a year now since Samsung refreshed its premium tablet segment. In sticking with its September release schedule for the Galaxy Tab S, Samsung is set to make its latest high-end tablet, the Galaxy Tab S3, available around the same time that the recently unveiled Galaxy Note 7 makes its debut in several markets globally. 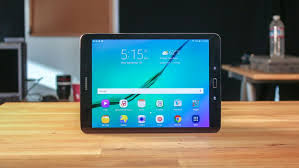 This is according to a statement [translated] by Samsung Colombia which confirms that the device will show up in September apparently with better specs even though the statement shies away from delving into further detail.

Back in June, we got to see purported images of the Tab S3 which seemed to align with previous sightings of the device at the website of Chinese telecommunications sector regulator TENAA. The Galaxy Tab S3 is expected to have minimal improvements over the Tab S2 while maintaining the mid-size and large display configuration i.e. 8.0-inch and 9.7-inch.

We’re already halfway through August so September is not so far off.

Samsung Galaxy Tab S3 Set For Laugh In September - See More Details John Peter 2016-08-18T10:41:00+01:00 5.0 stars based on 35 reviews It is over a year now since Samsung refreshed its premium tablet segment. In sticking with its September release schedule for the Galaxy Ta...