Trending Now!!! How To Style WhatsApp Text With Bold, Italic and Strikethrough

Cross-platform mobile messaging app, Whatsapp, recently rolled out a new update to its application which allows users to add certain characters before and after words or sentences to make them go bold, italic or with a line through the centre, known as a strikethrough. This feature was first launched by 2go, if you can remember. 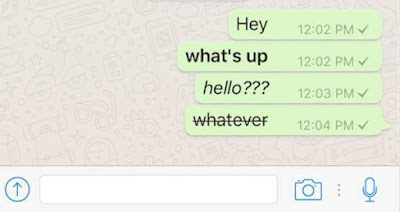 The feature was originally tested in beta but has now been rolled out to Whatsapp iOS and Android apps. hence, you can now add bold in whatsapp android and iOS app. The Whatsapp formatting codes can also be used online via the WhatsApp Web Client, but the formatting will only appear in the app-based version of the chats.

If you have downloaded and installed the latest WhatsApp version, you can make use of the Whatsapp formatting tricks as listed below:

• Bold: Add an asterisk (*) before and after the specific words or phrases you want to embolden e.g. *Sooloaded*

• Italics: Add an underscore (_) before and after your chosen words or phrases e.g. _Sooloaded_

• Strikethrough: Add a tilde (~) before and after the words or phrases you want to strike a line through e.g. ~Sooloaded~

Users can also additionally apply all three formats to a word: *~_Sooloaded_~* 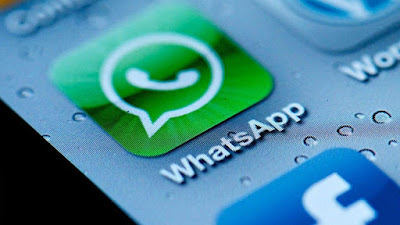 Other recent additions include the ability to share photos, images and other files stored on other third party apps – including iCloud, Google Drive, Dropbox and Microsoft’s OneDrive – with their contacts on WhatsApp.

Beyond photos, the app added the ability to send and received PDF files. Once users receive the file they can see an in-line preview.

More so, messages can be ‘starred’, to save them for later, and you can embed a previous text in your reply, like a Quote-Tweet on Twitter, and forward content to other conversations.

Trending Now!!! How To Style WhatsApp Text With Bold, Italic and Strikethrough John Peter 2016-08-13T08:25:00+01:00 5.0 stars based on 35 reviews Cross-platform mobile messaging app, Whatsapp, recently rolled out a new update to its application which allows users to add certain charac...

0 comments on "Trending Now!!! How To Style WhatsApp Text With Bold, Italic and Strikethrough"