Home news Glo Is Giving Out Free 4G LTE Sim Card, See How To Get Yours

Glo Is Giving Out Free 4G LTE Sim Card, See How To Get Yours 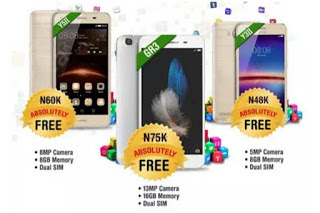 
The company said that the offer would enable Globacom subscribers who do not have 4G smartphones to experience the “exceptional speed” of the Glo 4G service.

"Glo Mobile offers the most innovative services and data plans at  affordable rates. With this special free 4G LTE smartphone offer, we have once again demonstrated our resolve to always give our subscribers the best value. It cannot get better than this,”

If you want to join the most advanced network (4G LTE), you will have to buy and register a 4G LTE SIM or swap your existing SIM for a 4G SIM, get a 4G phone and dial *777# to buy a data plan from Glo.

You can as well visit the nearest Gloworld shop to connect to Glo 4G LTE network and enjoy the best from Glo.

Glo Is Giving Out Free 4G LTE Sim Card, See How To Get Yours John Peter 2017-02-21T06:11:00+01:00 5.0 stars based on 35 reviews Nigeria’s Telecommunications service provider, Globacom, has started giving it's data customers or subscribers who subscribed to the sp...

0 comments on "Glo Is Giving Out Free 4G LTE Sim Card, See How To Get Yours"