InterC is a 4G LTE network provider in Nigeria, It has a bit cheaper and affordable data plans for their potential customers or subscribers, that is at least better than other 4G LTE network data plans. InterC was launched on August 23, 2016 silently without too much adverts. So that's why many people don't know much about them.

InterC means Interconnected in full and is the rebranded InterCellular X that has partnered with Transsion holding  which are the makers of Infinix, Tecno, and iTel phones of course, ringo communication and Yudala. However, their logo says "Join The Network That Keeps You Interconnected". Their data plans and price is a little bit cheaper and affordable more than other 4G LTE networks  like Ntel, Smile, Spectranet e.t.c 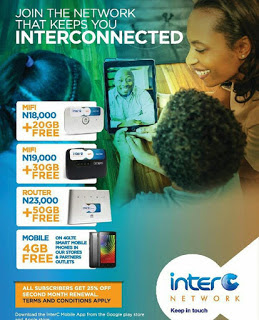 They are still new. Their network is only available in Abuja, Port Harcourt, Kaduna, Lagos and many cities will join soon. They offers free internet for the first month, 25% off on the second month for potential subscribers.

They have three categories of data plans that you can choose from, depending on the amount of data you wish to consume.

This is one of the interC products for fairly light users of 1.5GB to 4GB, who want high quality internet on the go for their smart mobile devices. You can also Top up, if you run out of data using this plan. These are the data plans below.

This data plan category, is for medium Internet users of 7GB to 25GB, who wants high quality Internet for mid to heavy duty stuff such as multiple video streaming, long Skype video and teleconference calls, movies e.t.c It is recommended or suitable for in home and office especially those internet users who want to be on a fixed recurring monthly plan. So these data plans are one of the best though.

This is one of InterC product for heavy users of 50GB to 110GB, who want high quality internet for heavy data stuff. It was designed for everyone and can be used in the office to download and many other things. Lets see it's data plans.


So get a 4G LTE smartphone and enjoy the best of InterC data plans. Join the team of fast browsing and stay connected. Faster than fire! 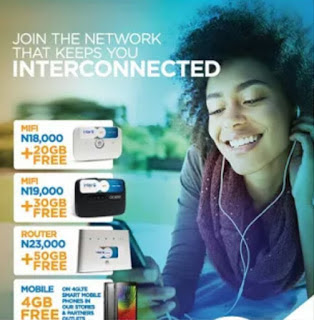 InterC Android App is also available on PlayStore which can be downloaded by clicking here.

InterC 4G LTE Network Data Prices And Validity Period John Peter 2017-02-17T16:38:00+01:00 5.0 stars based on 35 reviews InterC is a 4G LTE network provider in Nigeria, It has a bit cheaper and affordable data plans for their potential customers or sub...

Share this with short URL Get Short URL
interC