Glo has been in the tech news for few days now following their perceived reduction in data volume for their subscribers. This reduction actually kept both 3G and 4G subscribers share the same volume of data at the same price as well.

The news was also published on this blog where we frawned at Glo still bearing the name "Grand Masters of Data" after the reduction in data volume for their subscribers especially now that the month is coming to an end.  Click here to read the said article.

However, in the heat of the said news, a disturbed glo subscriber took to Globacom official twitter handle and asked them to give him a reasonable reason why Glo Nigeria will reduce their data volume that will be allocated to their subscribers when they subscribe.


@GloWorld can you people give me a very good reason why you reduce your data from 3GB to 1.4GB for 1000 one month.


In response to the angry glo subscriber's twit, Glo quickly replied clearing the news going round about the reduction in Glo data volume for subscribers. In response Glo replied and said:


Hello, "data caps" has not been reduced. Subscriber who does not resubscribe 3 days after data expiration will get half the plan TT


See the phone below: 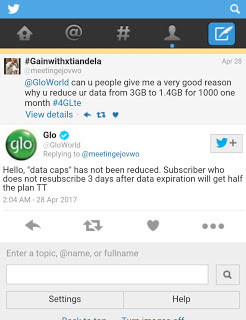 See the live twit below


@meetingejovwo Hello, "data caps" has not been reduced. Subscriber who does not resubscribe 3 days after data expiration will get half the plan TT
— Glo (@GloWorld) April 28, 2017


To further confirm Glo's response, last night I had to renew my data subscription and guess what?

I was given 1.6GB instead of the normal 3.2GB but because I renewed before the date my previous data will expire I was actually given a bonus data of 1.6GB again, adding to the 1.6GB I bought directly making it 3.2GB.

Here  is  the  screenshot of  my  subscription: 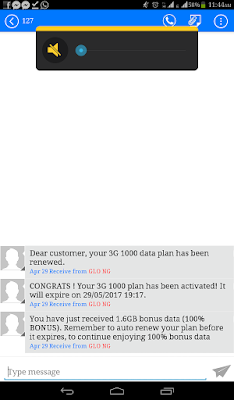 What this simply mean is that, for all Glo subscribers who will renew their data subscription before it expire will be given extra 100% bonus data. But those who wait for their data to expire then subscribe after 3 days, I guess they will be given just the  normal  data  they  will subscribe to e.g. 1.6GB for N1000 without extra bonus data.

Glo Response And Denial To Data Volume Reduction Confirmed -See Evidence John Peter 2017-04-30T13:05:00+01:00 5.0 stars based on 35 reviews Glo has been in the tech news for few days now following their perceived reduction in data volume for their subscribers. This reduction actu...

Share this with short URL Get Short URL
Glo
reviews