The LG G6 is the latest  flagship smartphone from LG. The device which was launched a couple of weeks ago is the first almost bezzeless smartphone to be announced this year and it also retains the traditional flat display unlike the curved screen used on the Samsung galaxy S8.

The LG G6 is no doubt a very good looking device, but aside the looks, the device is also very durable. According to LG, lots of hours went into torturing and also perfecting the structure of the LG G6 so as to make it withstand everyday use including fall and scratch. 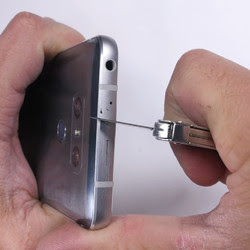 Of course, every manufacturer will actually vouch for their product and the only way to prove them right or wrong is by carrying out a durability test on it. A popular YouTuber "JerryRigEverything" who specialise in carrying out durability test on smartphones has just put the LG G6 through a series of tests which includes scratching the display screen with different sharp objects, digging into the phone's body frame and also testing the strength of the camera lens.

The LG G6 actually survived the series of tests which further proves the durability of the phone.

You can check out the video below: