Someone asked me sometime ago why his smartphone overheats constantly even to the extent of making it uncomfortable to hold on the palms, this is not the first time some persons are getting worried about this issue and after stumbling on similar topic online this morning, I think it’s time to reveal the major causes of this overheating problem and solutions to fix them. 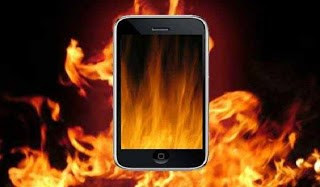 Sometimes, we notice our phones gets hotter than usual and the funny part is most smartphone users are acquainted to it and now see it as a norm for a phone to be very hot while in use. Don’t get it twisted, on a normal circumstance, a smartphone should be hot while in use but it shouldn’t be too hot to the extent of making the user uncomfortable. So without wasting much time, let’s see the causes and solutions to smartphone overheating problems.

REASONS WHY SMARTPHONE OVERHEATS AND SOLUTIONS

One of the major reasons why smartphones heat up is from the battery; some phones uses fake batteries and this is detrimental and can even result to explosion as we saw on the Samsung Galaxy Note 7 last year. For the solution, you can check the battery status by dialing *#*#4636#*#* for information on your phone. If you see anything other than “good” in the section labeled “Battery Status”, you might need to change your battery.

Your charger could be the cause of your phone getting overheated during charging, if your phone gets too hot at the port area while charging, my dear, the charger is faulty. For the solution, try replacing the USB chord but if the overheating persists, replace the charger entirely with an original company specified charger. See how to know a fake Infinix phone charger

Show me a hard-core gamer and I will tell you how his or her phone gets hot😀. The truth is some apps and games use up a lot of processing power while you use them. If you use these apps over a long period of time, your smartphone will overheat. If it happens only when you use these apps, then don’t worry. You just need to close the app and let the device rest for a while. You can checkout some cool Android Games to download on your phone here

Have you ever installed an app and after that, you start seeing different annoying ads popups? You are not alone because it happens to many smartphone users. Some of the apps that behaves like that are actually infected apps, while some are dangerous viruses and Malware that can even damage your phone. Some phone apps are just badly designed. If you install an app and shortly after, your smartphone begins to overheat, there is a possibility that app is responsible for it. The solution is to quickly uninstall the app. You can also check out this Antivirus app to clean your phone of malicious attacks from playstore.

Some overheating is due to a factory fault in the device. A good example is the case of Samsung Galaxy Note 7 which was overheating and exploding last year after it was launched but was later recalled by the South Korean company. Meanwhile, if you just bought your phone and noticed it gets too hot, kindly go to the vendor or manufacturer and replace it. You can also take the smartphone to an authorized service center to have it fixed

It’s true that smartphone is fun to use, no one want to miss out on the latest happenings online and we always play games and watch videos with our phone but this activities makes the phone heat up. I mean, phones needs rest or don’t you think it gets angry when you don’t give it the rest it deserves? So in a bombshell, if your phone gets too hot while in use, just drop it for some minutes or few hours.

Also, avoid leaving your smartphone in hot conditions e.g. on car dashboards or near ovens. I personally noticed this whenever I travel a long distance as my phones seems to get hotter than when I'm at home. Also when the weather is hot, the phone responds by getting hot as well. So the best solution is to use the phone in a cool or not-so-hot environment. Avoid dropping the phone on car dashboard or similar places.


Yes guys, those are the main reasons, causes and fixes for smartphones that overheats. I hope you find this article interesting so please kindly help me SHARE this post on Facebook, WhatsApp, Twitter etc by hitting the share buttons below. Don’t forget to drop a comment if you have experienced any of the overheating issues on your phone. Thank you.

7 Main Reasons Why Your Smartphone Overheats And How To Fix It John Peter 2017-04-20T09:30:00+01:00 5.0 stars based on 35 reviews Someone asked me sometime ago why his smartphone overheats constantly even to the extent of making it uncomfortable to hold on the palms, ...