Read: How To Play Basketball on Facebook Messenger App 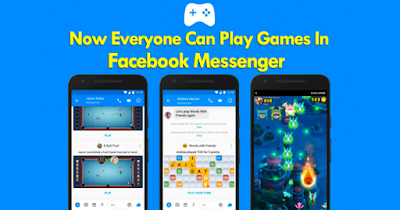 The games have also been updated, more features have been added to most of the games and even many more games are being built inside the Facebook Messenger App for Android and iOS platforms. Not only that, Facebook has also made it possible for a user of Messenger App to play some games with his friend at the other end.

That means, two friends can play one game at the same time, from different locations. One of the games that first adopted this new mutual gaming feature on Facebook Messenger is "Words with Friends" game.


Since this feature is now rolled out to all the countries, you can now go ahead and update to the latest Facebook Messenger app in order to enjoy the games in the Messenger application. Whether you are using an Android device or an iOS device, Facebook Messenger App games are available for you. Just update your app and enjoy!.

Read: How To Play Chess Game On Facebook Without Third Party Apps

Facebook Messenger Games Now Available For Everyone John Peter 2017-05-09T12:27:00+01:00 5.0 stars based on 35 reviews Facebook Messenger has some built in games which you can play with your friends on Messenger, this feature was first introduced last year ...

0 comments on "Facebook Messenger Games Now Available For Everyone"