WhatsApp went from a text messaging app to a video calling app last year, but it doesn't seem to be done with the feature just yet. The app looks set to get picture-in-picture functionality, a new feature that will make video calls more convenient in case users want to continue chatting even as they make a video call. The new WhatsApp picture-in-picture mode for video calling has been spotted in app version 2.17.265 running on the Android O Developer Preview.

As per a tweet by WABetaInfo, which has a good track record when it comes to details of forthcoming WhatsApp features, the PIP mode inside WhatsApp app was spotted on version 2.17.265 of the Android app and was turned on by default on Android O developer preview. WABetaInfo further clarified that Android 8.0 O has a particular API that was used by WhatsApp for enabling this feature. 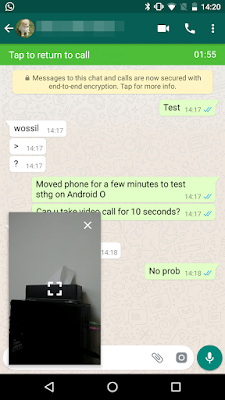 We’re not sure from the picture above, if the small window with the video chat is a floating window that can be dragged around, nor do we know if the video conference would continue even after minimizing WhatsApp. If so, this would be one of the first video calling apps to allow this type of multi-tasking on a smartphone platform.

With the PIP mode, WhatsApp users will get the convenience to continue the conversations via video chat while browsing through their text messages. As this feature has been spotted on Android, we will have to wait and see if it will make its way to iPhone soon as well, though given the fact the new feature is said to be using Android O's APIs, that might be a little difficult.

Are you an avid WhatsApp user who would love the idea of a pop-out video calling feature?

Whatsapp Introduces Pop-Out Video Calling Feature: Chat And Video Call Same Time John Peter 2017-07-22T10:03:00+01:00 5.0 stars based on 35 reviews WhatsApp went from a text messaging app to a video calling app last year , but it doesn't seem to be done with the feature just yet. T...